From the pages of Mayo Clinic's Research Magazine Discovery's Edge

Like a case of breaking and entering, when multiple sclerosis attacks the central nervous system, it leaves an evidence trail of theft and damage in the brain. But just as it’s difficult to assess the full extent of a burglary until one begins looking for clues in each room, MS has similarly challenged scientific investigators. They’ve had to search different areas of the brain to assess what and how much has gone missing, determine how valuable those items are and whether they’re replaceable.

MS doesn’t lend itself to one simple definition, but recent studies have shed light on the variability across stages and subtypes of the disease, and among patients.

Damaging the communication highway between brain and body, MS can harm the ability to talk, walk, eat or even think. At the root of the problem are disrupted nerve signals that seem to result from damage to the myelin sheath that wraps around nerve fibers, much like a wire with a frayed casing fails to conduct electricity properly. 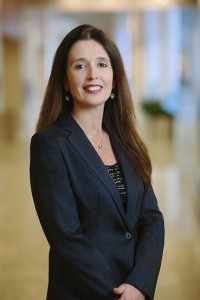 Claudia F. Lucchinetti, M.D., Eugene and Marcia Applebaum Professor of Neurosciences, is chair of the department of neurology at Mayo Clinic in Rochester, Minn. She has developed the world’s largest tissue bank of multiple sclerosis lesions in her quest to find effective treatments for the condition

Since MS was first diagnosed a century and a half ago, it has puzzled and intrigued physicians and researchers with its complexity. While MS now affects approximately 2.3 million people worldwide, the cause remains unknown, the course of disease is unpredictable and there is currently no cure. Diagnosis and treatment are also challenging because no single diagnostic test exists, but Mayo Clinic researchers such as Claudia Lucchinetti, M.D., chair of neurology at Mayo Clinic in Rochester, Minn., are hoping to tackle these unknowns.

Insights into Early Disease Stages
Since 1995, Dr. Lucchinetti’s research program has been trying to understand the lesions caused by MS and what drives their progression, so effective treatments can be developed.

She began to collect and analyze MS lesion brain biopsies from patients who had not yet been diagnosed as having MS. “What’s unique about these patients is that they were being worked up for tumor or something that required biopsy to exclude another diagnosis,” she explains.

With over 900 MS tissue samples to date, Dr. Lucchinetti’s collection is the largest of its kind in the world. It has provided a unique window into the earliest stages of MS, as well as its later development.

Those samples helped Dr. Lucchinetti to establish and name four types of MS lesions. “We thought that MS lesions were formed in a similar way in different patients,” says Dr. Lucchinetti, “but our work suggested distinct pathways of tissue injury in different patient subgroups.” Moreover, the findings suggest that patients didn’t change lesion subtype over time, but maintained a consistent pattern.

The revelation that these lesion differences weren’t stage-dependent but patient-dependent caused a major shift in the field. “It seemed to explain some of the tremendous variability we saw in patients with regards to clinical course, clinical outcome, prognosis and treatment response,” says Dr. Lucchinetti. 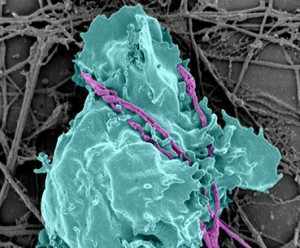 This scanning electron microscope image shows mouse cortical axons (the long strands in gray and purple) that are under attack by an anti-axonal CD8+ T cell (the blue-green cell). The attacking T cell has lifted several axons off the plate and is actively damaging the fibers. This is what researchers think happens to demyelinated axons in the central nervous system of a patient with multiple sclerosis. Identifying and blocking these anti-axonal CD8+ T cells is one of the major goals.

These watershed findings, published in the Annals of Neurology in 2000, helped that same year to launch the MS Lesion Project — an international research initiative led by Dr. Lucchinetti and funded by the National Multiple Sclerosis Society and the National Institutes of Health.

Patients from the study have returned to Mayo Clinic years later for detailed cognitive assessment and imaging follow-up. “It’s a way to examine how early stages of the disease may affect how it plays out years later,” Dr. Lucchinetti says.

Her team has also demonstrated the involvement of the brain’s cortex in MS. In 2010, they published a groundbreaking study in the New England Journal of Medicine, which offered solid evidence that the cerebral cortex may be the first area targeted and affected by MS.

The findings showed that marked inflammation was also present early in the disease process. Although inflammation is transient during later disease stages, Dr. Lucchinetti demonstrated its ongoing relevance and the importance of finding strategies that target the inflammatory process in MS.

Better Imaging and Disease Models
Dr. Lucchinetti’s work is also helping to develop better models and imaging biomarkers for MS. “A major challenge has been the need for animal models that adequately mimic human disease,” says Dr. Lucchinetti. “Anything we learn from animal models needs to be reconciled with human lesions.” 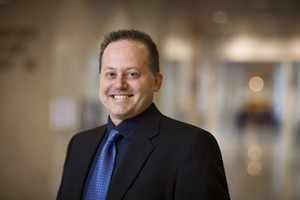 One of the hallmarks of MS that’s visible on MRI is demyelination — when nerve fibers in the central nervous system are stripped of their protective myelin sheath. Axon injury underlies the loss of function that patients experience, and for decades experts assumed that demyelination alone was to blame. However, Dr. Howe showed that demyelination only predisposes the axons to injury. Currently, he’s investigating several molecules that are potentially involved in injuring demyelinated axons.

“Our focus is on how to protect the axons so we prevent progression, since once an axon is gone, it’s gone for good,” Dr. Howe explains.

This is setting a new direction in MS research. The team is examining the role of an immune cell called CD8+. Many MS drugs have been based on another type called CD4+ cells, which were suspected of playing a leading role in neurologic dysfunction, but Dr. Howe challenged that notion.

“The problem for patients on drugs that prevent or reduce demyelination is that many still go on to a progressive phase,” he says.

One of Dr. Howe’s latest projects is to build a biobank of neurons and oligodendrocytes (cells that make up myelin), grown in the laboratory from human neural stem cells from MS patients.

“The goal is to grow human axons in a dish right now so that we can test therapies that protect them,” explains Dr. Howe. In addition, when stem cell transplant therapies become available, patients can readily access their banked cells.

Drs. Howe and Lucchinetti are also collaborating on research that involves subjecting neurons, axons and oligodendrocytes to stress, then using their metabolic by-products as potential clinical biomarkers to understand pathology, identify therapeutic targets and customize treatment. 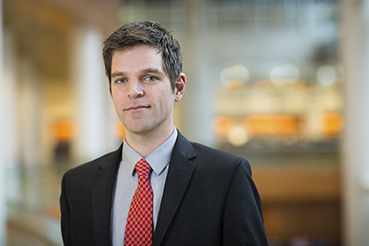 Another researcher has been focused on developing better imaging techniques. Pediatric neurologist Jan-Mendelt Tillema, M.D., has been looking at MS and other demyelinating diseases in children. While only 3 to 5 percent of MS cases have childhood onset, lesions in pediatric patients are less well demarcated on MRI, making diagnosis particularly tricky. That’s one reason why Dr. Tillema and the late Istvan Pirko, M.D., had been working on developing advanced imaging techniques that would be useful for both pediatric and adult patients.

Looking ahead, Dr. Lucchinetti and her colleagues at Mayo Clinic will continue to focus on how to limit progressive disability, which is one of the major drivers of problems that MS patients experience. Recognizing MS as a complex, multifaceted disease that requires a multidimensional approach, the Mayo Clinic team has set ambitious goals: finding early diagnostic biomarkers, designing better imaging tools and animal models, and creating targeted therapies that will finally put the brakes on the disease.

“Slowing progression is the key in MS research,” says Dr. Lucchinetti. “It is at the core of our research efforts at Mayo, and we’ll continue to take a collaborative, multidisciplinary, team-based approach to address this significant, unmet need in our patients.